On Business Intelligence and Event Processing This is a quiet time, although we do not have holiday period in Israel, those of us, like myself, in which major part of the work requires interaction with the rest of the universe, it is quiet time since my colleagues are away - much less Emails, no conference calls, today I've spent the day in Rehovot known for its famous "Weizmann Institute" but this time (a famous building from the institute is in the picture above) I have visited an IBM site not far this institute, IBM has acquired in the recent years several Israeli companies, and they are now fused into a single lab ILSL - Israel Software Lab (well - ISL was already taken in IBM by India Software Lab).

Anyway, coming back, I saw that the blog world of event processing is also alive these days, but this time I would like to give a few comments to "operational analytics: yesterday today and tomorrow" by Colin White
In this article Mr. White has some interesting assertions (at least, my own interpretation of these assertions):

(1). CEP is a buzzword which stands for a kind of operational analytics that should be used in extreme cases.
(2). BAM has failed since it has been independent of BI
(3). Hint at the fate of CEP (or ESP, it is not clear from his article what is the difference) will be the same if not be part of BI.

While I am sure that Mr. White is a big expert on BI, it seems that he also falls into the "hammer and nail" trap that has been discussed by myself and several other bloggers in this area. So here is some preliminary responses to his assertions:

(1). CEP is a technology, it has roots in multiple disciplines, and some of it has roots in BI, but there is a distance between this and the assertion that it is part of BI. CEP has different uses that may not be even connected to BI (e.g. network management diagnostics or situational awareness), here again we get back to the issue of motivation for using CEP - the consistent view of database people is that the only reason to use CEP is extreme latency/throughput otherwise one can use the right religion of SQL databases, I think that this issue has been discussed also in the EP blogs that there are multiple reasons for using CEP and the high throughput / low latency is one, but not necessarily event the dominant one.

(2). As far as the "BAM has failed" -- is that a fact or a wishful thinking ? in the Gartner BAM and EP summit we have heard some success stories of BAM, and saw some prospering BAM products. While there are synergies and relationships between BAM and BI - I wonder what are the success / failure criteria used to derive this assertion ?

(3). I have already stated my opinion about the question - whether event processing is a footnote to databases
While I spent many years as part of the database community, I am in the opinion that event processing is a discipline by its own right, with some interaction and intersection with the database area, as well as other areas (business rules, distributed computing, middleware, software agents).

This is a preliminary reaction - mostly giving some comments to the article, which does not free me from writing a "positive" article about - the relationships between event processing and business intelligence, and I'll do so in one of the next postings - more later.
Posted by Opher Etzion at 7:06 PM 2 comments: 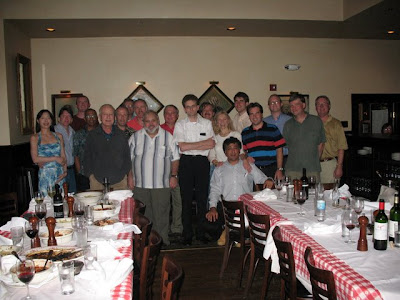 This picture has been taken in the EPTS meeting in Orlando in September 2007, the meeting itself has been described by Paul Vincent in his blog : first day, second and third day.
As written before the EPTS is a consortium (under construction) intended to promote the understanding and incubate standards in the event processing area. Getting into 2008 - here is the work plan that has been recently approved by the steering committee:
Quarter 1: Launch - as expected when some of the players are big companies, the formalization process take some time, but it will hopefully converge soon. After getting approval of the steering committee - the idea is to invite vendors, customers, academic people and other individuals to join the list of founding members. The launch will also include - introduction of EPTS website (a prototype already exists - thanks to Brian Connell from WestGlobal and Serge Mankovskii from CA) which will support the work of work groups and other EPTS related information (leaving news, blog pointers, general discussion forum for David Luckham's site ). In the launch opportunity we'll also sign and seal the first version of the consensus glossary edited by David Luckham and Roy Schulte, with many contributions provided so far (a draft of this glossary is available)
Quarter 2: "State of the practice" white paper based on a collection of use cases. This is a workgroup launched in the last meeting, with a diversified team of volunteers. The first phase carried out by Tao Lin from SAP, Dieter Gawlick from Oracle and Pedro Bizzaro from University of Coimbra in Portugal to define a template to describe and compare use cases, where the use cases are those presented in the three EPTS meetings, in the Dagstuhl seminar on event processing and maybe open for others. After the glossary, this will be the next community effort in order to understand the state of the practice (there has also been some work last year on "reference architecture" lead by Tim Bass that we'll return to after completing the use cases survey).
Quarter 3: In this quarter we'll hold the fourth EPTS meeting (place and time are not determined yet), participate in the DEBS conference, which we support of becoming the research "flagship" of the event processing community. We'll also launch a portal of teaching material on event processing for the next school year.
Quarter 4: Our first contribution to standard -- we'll launch in early year a workgroup to provide the EPTS input for the OMG RFP on meta-modelling.
Many people are contributing their time and energy for these community activities, and I am looking forward to the momentum that will be created after the EPTS formal launch... stay tuned, or even better - join. Instructions about joining -- soon.
Posted by Opher Etzion at 7:34 PM No comments: