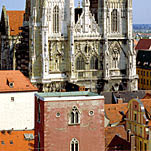 This is another picture from Regensburg - a picturesque medieval town on the Donau. Today I have attended the first day of the CITT conference organized and navigated by my good friend Rainer von Ammon .
The conference is held in an old historical building, and like the VLDB that was held in a historical building in Vienna, the architect of that building also is in the opinion that people love going up and down the stairs multiple times... Anyway -- I have learned several interesting things - one that is not really related to the conference-- one of the speakers revealed that there is a formula to calculate the value of any digit in pi without calculating the other digits - and indeed after some search in the internet (wikipedia does not seem to know about it) I have found it .
Other than that - some discussion about creating a consortium for an EP European project, some presentations about "fraud detection", a keynote address was given by Stefan Reid from Forrester Research - the topic has been - " ESB Open Source Challenge", and he discussed what is ESB and is it mature enough to be an "open source" topic. His ESB definition has been too broad to my taste (i.e. he sees business process modeling and monitoring as part of ESB, I think that they are not really ESB functions, and architecturally they are in another category). He also said that "in the end of 2008 any ESB that will not include CEP will be obsolete" - and I obviously like this statement. I think that ESB (in the SOA case) is the major (but not the only) carrier of CEP (but I'll discuss ESB in a seperate posting). Later in the day Rainer brought his entire class of students and they presented BPM oriented projects. The last presentation was done via Skype from Redwood City - two of Rainer's students that are doing a project in Oracle has presented their project, while the two CEP Oracle champions - Dieter Gawlick and Shailendra Mishra (my EPTS partners), have presented the upcoming Oracle CEP. Well - there is some room to improve the skype technology.... There was also in the middle a panel about BPM patterns - and somebody made the observation that people talk about technical patterns, while there is no enough work on business patterns - this is true in a way for EP as well, but I'll discuss patterns in another posting. Tomorrow - second day, where I'll have to earn my trip by giving my keynote talk entitled: "event processing as part of enterprise architecture" - well, since I am working in a "just in time" mode - I'd better finish this presentation.
PS.
Tim Bass complained in his popular Blog about the lack of possibility to read blogs and from China -- I have checked in the log of my blog (thanks to google analytics) -- it seems that there are (not many but some) people form China that are reading my blog - I even have one reader from Xiamen (most are from Beijing), so probably there is a way to overcome it. I have done a business trip to China (Beijing only) in 2004, and it has been very interesting experience, indeed when I watched CNN in my hotel, and they started to talk about demonstrations for democracy in Hong-Kong, there has been a sudden communication obstacle that has been resolved three minutes later, but this has probably been a conicidence.
I am also glad for Tim that democracy has been restored in Thailand after some period of military control.... things are fragile in our universe... Back to my presentation now - more later.
Posted by Opher Etzion at 9:35 PM