On Singapore and some thoughts about the western democracy 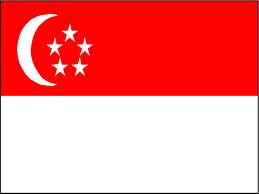 Back home after a week in Singapore (VLDB conference + a few days of being a tourist, using public transportation).    Here is the Merlion - Singapore's symbol: 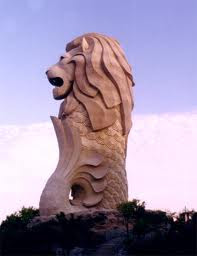 and here is myself in the Singapore's zoo which resides inside  a beautiful rain-forest. 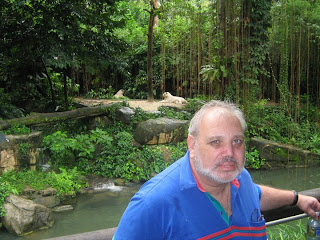 I also learned about Singapore culture and unique political structure, Singapore is a combination of people who are by origin Chinese, Indian and Malayan - and all these languages are spoken, but the common language is English.  I have read in the local newspaper brought to my hotel room every morning an interview with Lee Kuan Yew,  the person behind Singapore, one of the question addressed to this 87 years old statesman is about the democracy style.  Singapore does not have democracy in the western style, what Lee called in the interview "competition based politics", and the power is held by a single group of people throughout Singapore's lifetime so far, but the results are very impressive -- it has the largest growth rate in the world in 2010, the economic is good, the quality of life is high and people are generally happy, the government is one of the less corrupted and most transparent in the world.   This adds to the skepticism I have developed over the years towards the western style politics, of course, there is always a danger that people in power may abuse it, but this is true no matter how they got to power. I am not sure that the current system in which people elect their leaders according to their TV appeal really brings the right kind of leaders.  Come to think of it, in the corporate world, a corporate does not elect it CEO that way either.  Maybe we should think of a country leadership like corporate leadership,  with board of directors which represents the interests of the stakeholders (the citizens), and a CEO that manages the country and being nominated by the board of directors (that can also send the CEO home anytime),  this is not really the same as a parliament system - of course, there are many details to sort.     We are educated that the western style democracy is an axiom, and that any deviation of it is dictatorship and bad for the people,  Singapore is a counter-example, while I will not claim that everything is bright in the Singapore system, the world does not consist of black and white, I was very impressed by what has been done in this island without natural resources over a relatively short period of time,  I think that the west has something to learn from Asia in more than one sense.    More - later
Posted by Opher Etzion at 4:40 PM

interesting thoughts on politics, but I'm not quite sure if economic structures would help reducing corruptness of people.
I just want to recall several incredible incidents of economical crime in the past couple of years. Or do you think it is best that a CEO observes his employees with private investigators or if a board knows about facilitation payments without doing anything against it?
I'm not quite sure, but I do not believe that anything would become better, maybe just different in the style people behave, but the result might be pretty much the same.

Hi Christoph. In order to get elected today people need a lot of money, which is an opening for corruption, also the multi-party system we have in Israel and a lot of other places enable small sectoral parties to have unusual amount of power since they are needed for a coalition, which is another type of corruption. The fact is that the Singapore system is considered much less corrupted from the western democracies. Now - this may be a temporary issue, the interesting question is how to build a system that can fight corruption. BTW - there is of course corruption in the corporate world, but many corporations have developed auditing capabilities that attempt to discover such deviations, in DEBS 2010 we have reported on such an auditing system that is based on Amit.

Bottom line: there is no perfect system, but watching Singapore gives a food for thought that we are brainwashed to think that the western style democracy is superior, and I think we should also look at other alternatives, and then we may or may not think that it is still the best system.
cheers,

Yes - we do not have an ideal system, but which system is ideal?

I'd rather say, as soon as someone get's power the power changes it's character and thinking. Therefore there won't be a perfect world at any time.