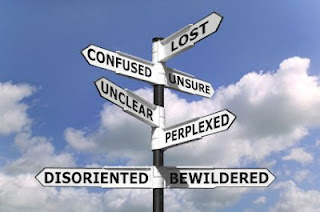 Some people react badly to uncertainty, as seen in the illustration above,  some people are very good in dealing with uncertainty,  I am still uncertain to which of these two categories I belong.
Today I have delivered a tutorial on uncertainty in event processing,  in the tutorial day that precedes the main conference of DEBS.
The tutorial was 3 hours, I delivered around half of it, and the other half was given by Alex Artikis.  Fabiana Fourier and Zohar Feldman from our team in IBM Haifa Research Lab participated in the preparation.         I have written earlier this year about the issue of uncertainty in event processing.   In the tutorial we provided some motivation, talked about the representation of uncertainty, handling uncertainty, and Alex contributed his part by talking about different AI techniques to uncertainty event handling.  I'll write a series of posts about the different chapters of this tutorial in a later phase, but meanwhile you can view this presentation on slideshare.    I'll write more on DEBS 2012 later.

right - I am living in the past.
Changing it

I thought this was an excellent tutorial - uncertainty and fuzzy logic being yet another "practical AI" topic to be handled in EP applications IMHO.