On subjective view about discussion agenda

I tend to believe in positive thinking, my previous Blog posting had a somewhat negative tone, since it explained why certain discussions over the blog-land turn me off (I am quoting Giles Nelson from Apama). Sometimes one has to voice a negative tone to make a point, but today I would like to quickly return to positive tone, and say what I do want to see on the blog-land. This is, of course, my own subjective view, as noted in the title, and other people may have other interests.
First - there are both macro-level issues and micro-level issues that worth discussing; macro-level issues relate to the "event processing" discipline in general, while micro-level issues relate to particular topics that are of interest. I'll partition the discussion to -- applications and technology.
Macro issues about event processing applications:

Some of the recent postings on Blogs are exactly on such topics: The Smart Order Routing application, The Value of state and more.

This is probably not a complete list, but indicates on directions, this is more or less the topics that will be discussed in the 4th event processing symposium, and in the next postings on this Blog - I already have a backlog of several topics to post...

Posted by Opher Etzion at 9:08 PM No comments:

Is my cat CEP or not?

One of my favorite cinema artists is Mel Brooks, and one of the great films of Mel Brooks is known as "silent movie" (see flyer above). To those who don't know or don't remember, silent movie is a film about doing a silent movie, and most of the plot involves around Mel Brooks and his gang going to famous actors asking them to participate in a silent movie, they agree and this sums up their participation, since their voice is not heard; there is one exception - when asking the world famous mime Marcel Marceau to be in the film he replies, "Non", the only spoken word in the entire film, since he talked, he did not participate in the silent movie.

There are different reasons why I don't find it interesting to spend time on these discussions are:

Let's start with the reality -- what the current vendors attempt to do is to build generic products that will enable to develop various sorts of applications in the area of event processing. This is different from the past, where event processing has been done in hard-wired, hand-coded, ad-hoc fashion to build a single application. While any single application may be challenging, the challenges in building generic products that will be a cost-effective alternative to hand-coding, are somewhat different from building ad-hoc applications. The content of these products is determined by several factors - not by the boundaries between "simple" and "complex" - there are multiple dimensions of complexity, and different applications may exhibit different type of complexity (functionality, topology, scalability, event types)... No matter where we'll put the border between the "simple" and "complex", a generic product will have to support both sides of the border. Bottom line -- the importance is ROI for the customers and not whether something is called "complex" or not.

Debate over terms: when we have done the first event processing symposium, in March 2006, the conference started by nine presentations about the "state of the art", and a very quick observation has been that each of us has invented his own set of terms. Consequently we have decided that the first community effort will be to produce a glossary edited by our non-vendor colleagues, to reduce bias. They have collected input from many sources with different opinions, sometimes strong opinions (it is amazing that people are so caring about terms). The glossary has been published recently and its announcement was endorsed by many people in the community. I am sure that nobody is happy about all terms, but as a compromise among all opinions, the editors have done a pretty good job.

Personally I don't have strong feeling towards terminology, so the glossary definition is a possible one, there are others as well, there is no absolute truth here, but - I think that is good to have a precise definition of terms that are accepted by large community vs. continue debating on terminology forever, even if I personally would have defined it otherwise. Among the possible interpretations, the editors chose to define CEP: Computing that performs operations on complex events, where complex event is defined as:An event that is an abstraction of other events called its members. As far as I am concerned, this is what CEP is.

Bottom line -- is my cat CEP ? well - I don't have a cat(I wonder if Roger King who has written the famous article "my cat is object oriented" had a cat).

There are plenty of more useful topics to Blog about - so no more on that issue.

Posted by Opher Etzion at 2:37 PM No comments:

On event processing as a paradigm shift

The readers are probably familiar with this picture where it shifts between seeing two faces facing each other (in black) and a white vase. I came across a (relatively) new blogger in this area, Pern Walker, blogging for Oracle's "event driven architecture". The title of the posting is:
Event servers, a disruptive technology. It describes the components of the (former) BEA framework, nothing new here, but the interesting part is the conclusion - event processing COTS is a disruptive technology, it displaces custom code in event processing, since it is more cost-effective.
This reminds me of a discussion we had in May 2007 in the Dagstuhl seminar on event processing, it was a night discussion with wine, and was lead by Roy Schulte, the question that Roy has posed to the participants : "Will Event Processing (EDA) become a paradigm shift in the next few years or not?”.
Today, I don't intend to answer this question, instead I'll post part of the discussion in Dagstuhl that included observations about "paradigm shifts" (thanks to my colleague, Peter Niblett, who documented the entire Dagstuhl seminar). I'll return to this topic again, with my (and maybe other) opinions about the answer, after the EPTS event processing symposium
Observations (from the Dagstuhl discussion):

Another question is to where in essence is the "paradigm shift" - is it the decoupled "event-driven" paradigm ? is it the "complex event processing", i.e. ability to find patterns on multiple events? is it the entire processing framework as the Oracle's Blog claim?

On flow oriented and component oriented development of EP applications 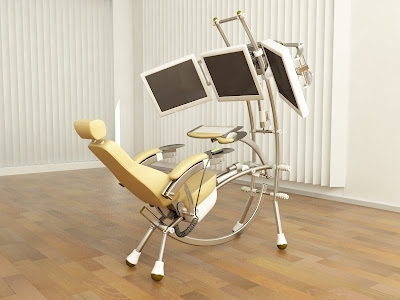 I got an invitation for some company I have not heard about for a kickoff of a product in the area of "seating in front of computers", I don't have time to go - but since they have also attached a picture of their product, I have copied it - I wonder if this is the current trend in ergonomy...
Anyway, today, some thoughts following a recent discussions here about development tools for event processing applications.
There are two possible ways, from the developer's point of view, to build an event processing network.

It seems that each of them has benefits for other assumptions - if the application is dynamic and mainly subscription based, then the first approach is probably better, since the notion of flow is not a stable one; if the application is relatively static, then there is a benefit to use the second approach, since it can provide more visibility into what the application as a whole is doing, and help in the validation, since the "decoupling" principle may bring to the developments' feeling of chaos (this is indeed one of the barriers of the use of event processing...). As said, the "flow oriented" approach can ease the validation of event processing application, there are also some tools that help validating "implicit" flow, but the validation issue deserves discussion by its own right. More - later.