On the right education for enterperneur 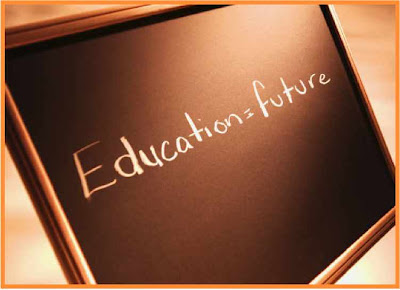 I came across an interesting discussion on the topic what is the right education for entrepreneurs.
According to the study cited in this article,  most of the entrepreneurs don't have degrees in computer science or engineering but in various other disciplines.   This echos the debated between Bill Gates who thinks that engineering education is the only one matters, and Steve Jobs who said that in Apple the DNA is mixed between engineering and liberal arts.
I have some perspective on this issue since I have enjoyed a diversified education. I did BA degree in Philosophy,  then went for MBA studies and learned the basic of business concepts, and then did PhD in Computer Science.
More than 10 years ago I participated in the "basic blue" management course of IBM, this was a "private course" given for new managers in IBM Haifa Research Lab, since due to organizational changes, and addition of one more level of management, many new managers were appointed within a short period of time to justify bringing the course to us.   As a preparation of the course, the participants fill a substantial questionnaire, and there are also 360 view questionnaires form managers, peers and direct reports.  When showing the results the course's instructor said that he was surprised to see that 16 of the 18 participants had very similar personality profile.  The common denominator:  all of them studied in the Technion computer science or computer engineering, I was one of the two exceptions.
While generalizations never properly work,  it seems that there is something in the engineering education that drive people to concentrate on the technical details and see their challenge in doing strong technical work, there is nothing wrong with it, any company small or big in the technology domain requires strong technical people.

Entrepreneurs require something beyond the technical skill,  they need the passion to change the world, to believe that they are doing the "next big thing".  This is another mode of thinking.  I have never been an entrepreneur (perhaps it is still not to late), but I have written about intrapreneuring   (trying to do "start-ups" within a big corporate) before.
If I need to reflect upon my past studies and see what contributed most to me, I view my studies as complementary.  The MBA studies contributed understanding of the basics of the business concepts,  the computer science studies contributed to the understanding of technology and the content of what I've been doing,  but the passion to change the universe, and the contribution to thinking out of the box was definitely been of the philosophy studies.  In retrospect they were most influential on shaping my personality.

I am not surprised that many entrepreneurs are not engineers, there is something inherent in engineering education that makes people think in boxes.

Posted by Opher Etzion at 12:30 PM No comments:

Email ThisBlogThis!Share to TwitterShare to FacebookShare to Pinterest
Labels: enterperneurs, high education, intraprenuring, off-topic, out of the box

More on the layered approach of the event-driven world 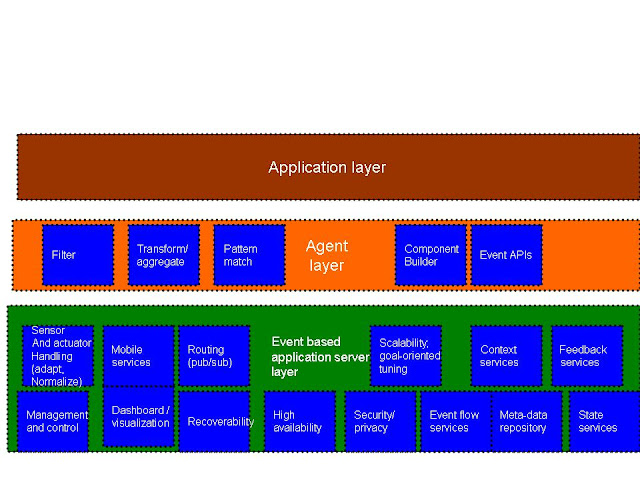 I have been asked by several people to write in more detail about what I meant  by the layered approach, so I thought it should be better illustrated in an architecture diagram (converting it to picture did not result in high quality, somehow).  The rationale behind it that event processing became pervasive in use, with both event processing products, and "build your own solution".    In the same way that application servers based on standards like J2EE contributed to building of certain type of web-based enterprise applications,  an application server for event-based applications is required to provide services from various types: from context service, adapters to sensor and mobile platforms, dashboard, management services, meta-data service and more.   The second layer is the agent layer which provide both directory of agents and tools to build your own agent.  The application is the third layer.   This architecture can provide independence, and ability to get best of breed in both services and functionality components from different sources, and combinations of "build" and "buy".
Standards are of course the key to make it happen.
Posted by Opher Etzion at 7:24 PM No comments: