The DEBS 2010 conference site is up now. DEBS is ACM conference, and the major research conference in the event processing area. DEBS 2010 is done in cooperation with EPTS, and will take place in Cambridge, UK. I am in the organizing committee again, this time in the role of tutorial chair, so I'll be soliciting tutorial submissions. The call for papers both in the research track and the industry track, tutorials, demos and more is on the conference's site.
Posted by Opher Etzion at 9:35 PM No comments: 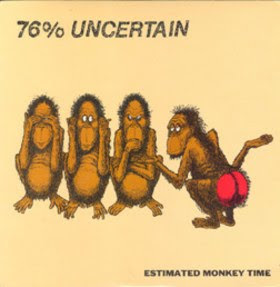 Back to chapter 11 in the EPIA book that deals with challenges that developers and users of event processing systems should be aware. One these topics is the issue of inexact events. The basic assumption about current systems is this is a projection of the "closed world assumption" kind of thinking, which assumes that every event that is reported really happened, that every details in the event payload is accurate, and that every event that happened was indeed reported. In reality, one or more of these assumptions may be invalid from several reasons, as shown in the following figure: 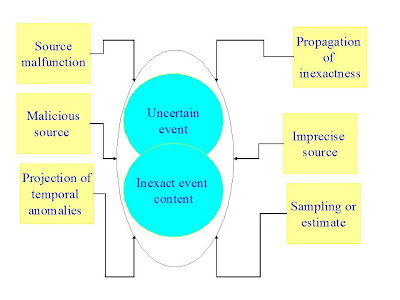 As shown in this figure there are several reasons for making one or more of these assumptions invalid.
The source (e.g. sensor) may malfunction; if the source is an instrumented program, there may be a bug in the instrumentation.
The source (event producer) may be malicious, and send wrong information in order to sabotage the system.
The inexactness maybe a projection of temporal anomalies discussed before, e.g. derived event that has not been detected.
This inexactness may be propagated, as a derived event is derived from an event which is by itself inexact.
The source itself may be imprecise, thus some of the content may not be accurate.
The input events may be based on sample or estimates.
The uncertainty does not stop in event content, it also exists in the bridge between events and situations, I'll write on that topic in a separate posting.
Posted by Opher Etzion at 10:50 AM No comments: 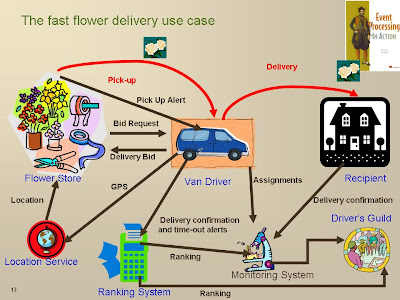 As explained in one of the previous postings, we are using a single example in the EPIA book as an example that accompanies the book, this is part of the book's methodology. I'll write more about the methodology more, as we are now writing the preface for this book explaining the methodology (among other things). Actually today I received an additional review of the book from the publisher and the reviewer has criticized the example claiming the since most of the readers are men, example that relates to flower may be considered as too feminine, and realizing that it is too late to change, suggested that we'll select another example in the second edition.
Well, I am thinking what will appeal to the real machos. 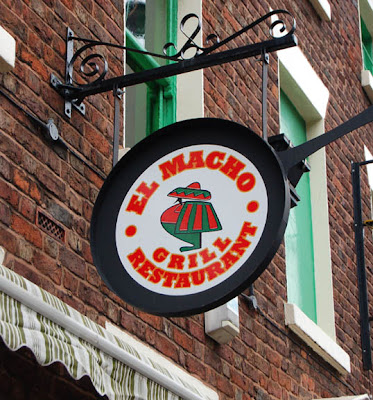 Maybe we should go for Poker example -- this is a real macho staff... 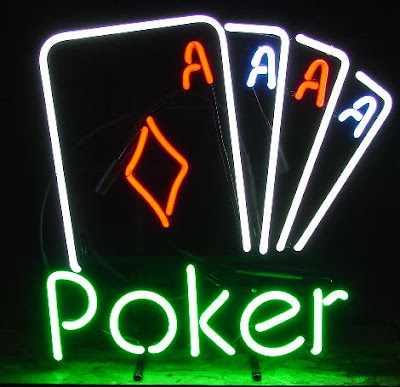 On second thought, the real machos are engaged in boxing, so maybe we should have an example around boxing match... go figure... 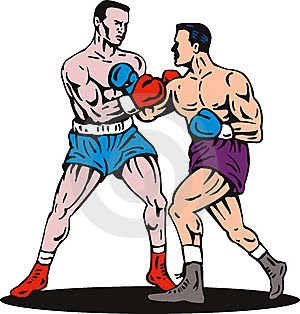 Getting serious now. The FFD (Fast Flower Delivery) example is explained in the book using our building block approach, it is also demonstrated using several languages. I have approached the entire community earlier this year, and there has been a very good willingness of participating in this game, implementing the FFD example in various languages by the "language owners". We have six languages participating in the game now. Languages implemented by four commercial products:
and two open sources:
The reader will be able to look at the example implemented in these six languages; furthermore, will be able to download a full or demo version of the engine implementing this language. As written before the logistics of constructing this website, validating the solutions etc... are done by students taking my event processing course. Some examples will be brought in-line to the various chapters of the book to provide the readers some glimpse of the different styles.
We should have a "Beta version" of this website within a couple of weeks.
I'll update about this experiment more.
Posted by Opher Etzion at 8:36 AM 6 comments:

When does a derived event actually happen? - (posting II) 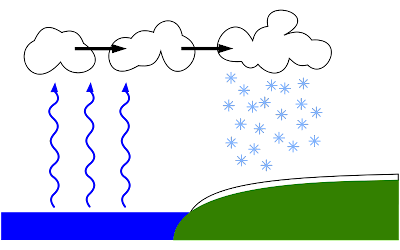 In the previous posting I've shown some possible anomalies when dealing with derived events. The picture above shows a snowfall as a derived event, actually where I am located, in Haifa, this is a very rare event (once every 20 years for a few minutes). There are various types of derived event, this time I'll discuss derived events of two different patterns: sequence pattern, and time-out pattern.
Example 1: The pattern is: if a sequence of events E1 and then E2 occur, derive event E3.
Let's assume that event E1 occurs at 9:00 and arrives to the system at 9:02, and event E2 occurs at 9:30, and arrives to the system at 9:31. The derived event is derived by the system in 9:33. The question is when does event E3 occurs. One can think of three logical possibilities:
I: E3 occurs when it is produced in 9:33; the rationale: since it is a virtual event, it does not occur in reality, and exists only since it is derived by the system.
II: E3 occurs when the last event that triggers the pattern matching occurs, in this case, in 9:30; the rationale: the derived event occurs when the patterns conditions are satisfied in reality, and this occurs when E2 occurs.
III: E3 occurs over the interval [9:00, 9:30]; the rationale: the derived event occurs over the interval of all participating events.
Example 2: The pattern is time-out (absence event). Example: if there is no bid for an auction by the end of the auction time, derive an event "no bidders".
Scenario: A bid was issued in 9:00 and is valid for 2 hours, in 11:00 it is closed without any bidders, in 11:02 the system issues the derived event.
We have similar three alternatives here:
I: The no bidders event occurs in 11:02, the time that the derived event is issued.
II: The no bidders events occurs in 11:00, when the "bid close" event occurs, which completes the pattern.
III: The no bidders event occurs during the interval [9:00, 11:00] --- since the "absent" event relates to the entire interval.
Like some other cases, there is no single solution that fits all cases; and the actual semantics of a specific case is a matter of policies, we see here three policies, which seem to cover most cases, but not necessarily all, that's why there is a need also to enable explicit derivation of the occurrence time of a derived event, i.e. the value of the occurrence time itself can be computed and derived.
More about temporal issues -- later.
Posted by Opher Etzion at 8:56 PM 2 comments: