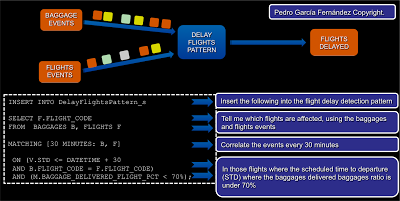 Tomorrow I am planned to visit three airports,  starting from Ben-Gurion airport near Tel-Aviv to takeoff from Israel, moving through Frankfurt airport in Germany for connection (hopefully no serious delays, it seems to be snowing in Frankfurt),  and ending in the Dulles airport near Washington DC.   I have reported in this Blog in the past on several flights related events, most recently - getting back from DEBS 2012 in Berlin 49 hours later than planned.   Airports are full of events,  and it was interesting to read Pedro Garcia blogging about  event processing as part of airport management system.    In an airport there are many events related to flights, luggage, strikes, weather and more.    The events that Pedro relates are both event that happened and predicted events (flight delay can be predicted).    While some of the delays are force major, others are certainly created by people (I have plenty of stories about human inflicted events).   Improvement of flight management, as well as improvement of luggage handling systems, can be very helpful.

It is also interesting to note that the system is based on the architecture we presented in the EPIA book, which is explicitly mentioned.  Always good to see that our work is useful to somebody :-).

Hoping for uneventful flights (have several more flights during the coming week).
Posted by Opher Etzion at 6:26 PM No comments: 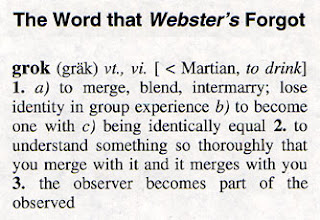 Thanks to Jeff Adkins,  I have looked at the website of a company called "Numenta" which has a seemingly interesting product called Grok.  As a science fiction fan, I like words from science fiction books that made their way into the language, and Heinlien's word from the immortal book "stranger in a strange land" is one of them.

The Grok product by  Numenta,  illustrated by this figure -

is described as a tool that discovers in real-time patterns in events (data streams) and generate predictions and anomalies detection. The technology behind it is described to emulate the human brain and belongs to the neural nets family.  There is a white paper on the website explaining it.

The site describes the types of created patterns as: temporal, spatial, and spatiotemporal.  However, their use of the term "spatial" is non conventional in the sense, that it does not have any necessary relationship to location, but is defined as "relationships between things that happen at the same time", which in the examples relate to relations between attributes of the same event (e.g. the relationship between age, gender and income to loan amount).  Calling this relation "spatial pattern" is kind of confusing to me.

Other than that -- seems interesting, I will be curious to get more information about real-life experience of this technology.
Posted by Opher Etzion at 7:58 PM 2 comments: 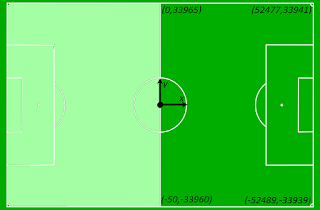 DEBS 2013 grand challenge was published today.  This is one of the new items we introduced in DEBS 2011 which continues to the next generations. The idea is to publish an event processing application, view various implementation and evaluate based on announced criteria.

This time the application is around football (soccer in American English), where the input events come from sensors attached to players' shoes and hands and to the ball, and some referee events.   The events are spatiotemporal by nature.

I hope that various teams will answer this challenge and will provide interesting solutions.

Posted by Opher Etzion at 9:49 PM No comments: