Yesterday, I have driven 1.5 hours (each direction) to participate in the Sapiens veterans reunion; I have worked in this company from 1983 to 1986, and is considered one of the old veterans. The reunion included people who worked there until 1994, some of the people I knew and some I did not. Sapiens had a product, whose initial name was DB/1 which was way ahead of its time, and enabled very high level language of database programming, that made the development of applications quite shorter (if you succeeded to become skilled in it), I discovered it while being in the Israeli Air-Force, and was part of a team that has built a complicated and substantial application in 4 months (later we got the Israeli Air-Force commander award, the first ever such award for a software system, I have it on my wall framed). While there has been some success, it did not conquer the universe in the way it could be. Which shows that amazing technology is neither a necessary nor sufficient condition to do it.
It was nice to meet many people that I have not seen for years, one of the characteristics of the Sapiens company (at least in my time, and according to the stories I've heard, also later), was the unique atmosphere of "unit pride" that I don't see in my current work place. My work over the years was greatly inspired from the years I've spent in Sapiens, and also the driving to use high level languages, since using Sapiens, I could never return to like imperative languages.
The meeting also resulted in some more LinkedIn contact, checking the count now, I have 824 contacts. My wife told me that when I'll get to 999, she'll join LinkedIn and becomes the 1000th -- so I still have some way to go.
Posted by Opher Etzion at 9:10 PM No comments: 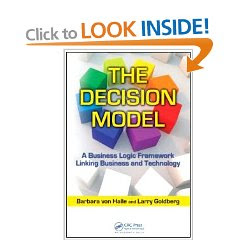 A few months ago I have written a review about "THE DECISION MODEL" book. Today I have hosted in the Haifa Research Lab one of the authors, Larry Goldberg, who gave us a live talk about the model. The decision model provides table oriented representation of rules, where a table designates a family of rules which share the same consequence (i.e. the "right hand side" assigns value to the same fact), tables are connected in a way that a fact that is an outcome of one table is an input for another table, this brings some order to rules, and also fits both inference rules or computational rules. I see strong benefit of using such structured way, and also possible to build an hybrid flow of "rule families" and "event processing networks". I think that there is a future there. I was involved in the past in some similar effort to provide some structure to data-driven rules, a short ACM SIGMOD RECORD paper is referenced here.
I'll have a short presentation in DEBS 2010 around the relations between event processing and business rules (in the fast abstract session).
Posted by Opher Etzion at 3:18 PM No comments:

For those who missed the original broadcast of the event processing symposium - a replay is now available. My presentation entitled "event processing - seven years from now" (Brenda Michelson asked me to talk about "event processing in 2015", but I thought that 2017 is safer...) is now on Slideshare. I am just listening to myself now, it is quite strange to hear your own voice and realize your English accent is somewhat strange. Enjoy!
Posted by Opher Etzion at 3:36 PM 2 comments: