On the criteria to evaluate event processing products 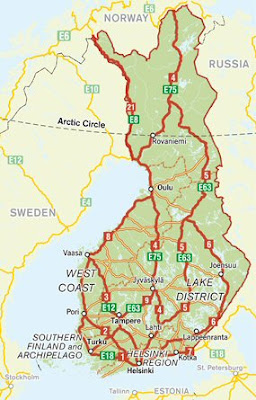 This is a map of Finland, the location of our family vacation for this year. The vacation is planned to start in Saturday, and I'll be disconnected from the cyberspace for 15 days. Working late at night to advance in the EPIA book we are writing.

It seems that this is the time of the year of analysts report, the community blogland was full of references to the Forrester wave report - Complex event processing platform, Q3 2009, dated August 4, 2009.

I will not comment about the grades that they gave the different products, the reason for that is that I decided that in my role as chair of EPTS, I see my role to work on the coop side of the coopetition, and leave the competition side of the coopetition to others. I think that the main competition is not between the different vendors (though they have point competitions), but against the barriers that the event processing area has to fulfill its potential and become a pervasive main-stream technology.

Without getting into the long list of criteria (not part of the report itself, but I managed to look at it), I have some doubts about the ability to get a meaningful information to customers by weighing 114 criteria. There are two reasons, one is practical and one is methodological.

On the methodology side, the compensatory model of decision making advocates weighing of many criteria, however, experience shows that the actual decision making model is lexicographic, meaning ordering the criteria according to importance, and making the decisions according to the most important criteria. People may use a compensatory model of weighing a lot of criteria, if their organization require them to work this way, but this is done only as justification to decision that has already been made by the lexicographic model.

Let's move from decision making theory to the event processing universe. The event processing universe is diversified from both functional and non-functional requirements point of view. I really don't believe in a "one size fits all" in anything related to this area, and this goes also for set of evaluation criteria. Getting criteria that are good in variety of cases and weighing them together may not get a good solution to any particular case. The more practical approach is to set a collection of relatively small sets of important criteria, and also segment the space of application, and assign a set of criteria to each segment. Anybody that will manage to do it, will help customers more to make the best decision for a particular case. I hope that EPTS, through its use cases workgroup will be able to provide this segmentation, and this will be the starting point for analysts to come with the right criteria for each segment. 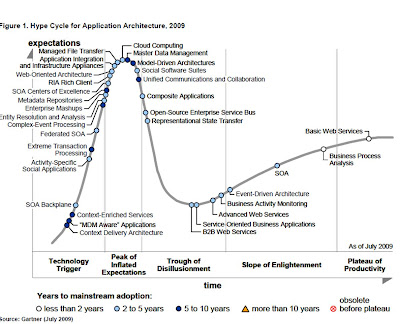 Here is a revised version of my Blog entry that relates to the Gartner Application architecture hype cycle report (Gartner Report ID number G00168300 from July 16,2009) , the revision was done at the request of Gartner who asked that I'll make exact citations in their report, and make clear distinction between what is quoted from the Gartner report, and my own remarks.

Here are a collection of citations from the report that are of interest from the Event Processing perspective:

Here are my own comments:

Concentrating on the important things with event processing

I would like to welcome to the Blogland - Mani Chandy, seen in this picture, one of the pioneers of the event processing area, the person who came to the first event processing symposium in 2006 to tell us what are the obstacles in the way to success in this area, and my partner in organizing the event processing Dagstuhl seminar in 2007, and the second one in 2010.
Mani has recently started a Blog named: Smart systems that sense and respond, so be sure to bookmark it. Mani writes his Blog as mini-papers, including references.

Inspired by the last posting on Mani's Blog I would like to write about a role of event processing that is sometimes overlooked -- not generating more information, but generating less information, or more precisely focus our attention on the right information.

Mani says in this posting that a human attention is the world's scarcest resource, thus focusing the attention on the right stuff has a very strong impact on what's happening. This is true in many senses, I think that in one of the many management courses I took over the years the instructor said something like --- you can do around 20% of what you plan to do, however the difference between success and failure is whether you can identify the right 20%. This is true in many areas of life, a smart student knows what is important to study in depth before the final exam, a smart physician knows which of the symptoms is important, a smart reporter knows how to identify the news item that will take him to fame, and there are many other examples.

Event processing is the basis for smart systems that can detect when it is important to attract the patient attention, in this case the role of the software is not to create more events, but to highlight existing ones, though the highlighted ones may be derived events and not raw events...

So -- focus your attention to other smart articles in the smart systems Blog. More - later.

Posted by Opher Etzion at 10:50 PM No comments: