Next week,  Wednesday, March 24, 2011 we are holding the EPTS virtual symposium, broadcast live from Arlington Virgina, in cooperation with the OMG event processing community of practice.  Anybody can attend virtually through the web -- registration to the symposium can be done using this link
The agenda can be found on the OMG site.
Posted by Opher Etzion at 8:33 AM No comments: 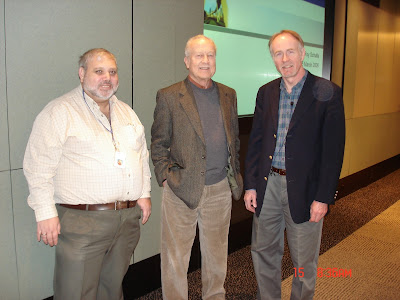 Today we can mark five years to the first event processing symposium.  In the picture you can see from right to left - Roy Shculte, David Luckham and myself - all of us five years younger.  The fourth partner to organize this meeting was Mark Palmer, at that time from Progress, now in Streambase.    This was the first meeting of the community - before the meeting we did not know each other;  two months before the meeting the mood was quite pessimistic, since it seemed that we'll not have critical mass, as some of those we invited did not think that they are doing event processing, they thought that they are doing stream processing.  Roy Schulte was instrumental to convince everybody that they should participate, we thought of a meeting of 50-60 people and ended up with 72 people.
The list of participants is here:
As you can see we have representatives of various vendors,  some of them do not exist any more,  some customers,  some academic people and some analysts.
After some search, I found that David Luckham's site also had a page about it which is still there.
The meeting started with several presentation about different view points on event processing, starting with David Luckham, and ended with Mani Chandy,  who played the devil's advocate.    Some of the speakers of the first day are still involved in the event processing universe like - Mike Palmer, Stan Zdonik who represented Streambase, and now back in Brown University, and the program chair of DEBS 2011;  some of them are not -- like Mark Tsimelzon, who was the brain behind Coral8, and now works for some VC, and Tim Bass, a colorful person represented TIBCO, who ran an opinionated blog for a while, both are not active in the community anymore.
The second day was the application days -  there were groups in parallel that discussed applications of EP in real-time (military) applications, BAM, BPM,  risk and compliance and RFID based applications.  It was interesting to note that the person who took upon himself to organize an algorithmic trading session notified us that due to the "top secret" nature of this application type, nobody agreed to present.
The immediate action item was to start working on glossary, as we realized that different people are saying the same things in different terms.   I think this has been improved, not totally resolved.
The other consequence (eventually) was the establishment of the EPTS, and the event processing community, which is still there.     talking about the event processing community -  the DEBS conference submissions were closed yesterday, and there is a significant growth in number of submissions (statistics will be published after the review process will end), so the community is still growing.
Five years have passed - and many things happened since then,  but this will always be the first event of the community. .
Posted by Opher Etzion at 10:26 PM No comments: