On the duration of an event

I have neglected the blogging for a while, returned from my trip in Asia, planning for my next business trip to USA (I am travelling too much, I hope for a non-travelling period after that, but one can never know), and also took some days off for the Succot holiday.    Yesterday I traveled with most of my family to Tel-Aviv, to "Beit Hatfutsot", which stands for "Diaspora house", and documents the life of Jewish community over the history in many countries.    Here is an artifact from the exhibition: 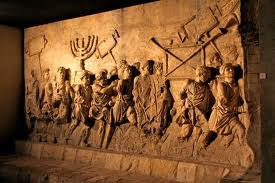 There was also an exhibition of Andy Worhal painting notable Jewish persons,  one of the pictures is of Golda Meir, the only Israeli Woman prime-minister (time for the second one?)

The VLDB conference also uploaded pictures from the conference, so here are two pictures - one from my tutorial, and the second showing me in the first raw (it was not really the first raw, but it was the first captured by the camera) listening to the keynote talk: 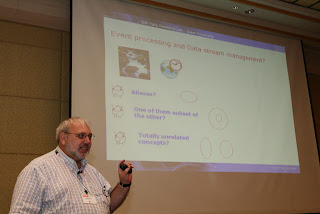 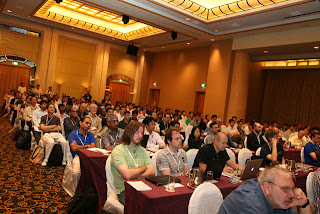 While I have been away there were some Blog posts by Paul Vincent that worth focusing upon, I have already commented briefly to this one, but want to have longer reaction about the issue of event duration that was raised by Paul.


In most of the models events are considered as instantaneous, occurring within a single time point,  the temporal database glossary from 1998 puts "instantaneous" as part of the definition of event, the rationale is of looking on event as transition between two states, and transition in most models takes zero time,    A few years ago when we started the discussions about terms, I've pointed out the temporal glossary as a source for event definition, and David Luckham issued a strong objection to that definition, claiming that no event is really instantaneous,  even simple events like the "aircraft is landing" takes more than zero time, while events that are composed of other events - "complex events" - like the 1929 crisis (now we can talk about the 2008 crisis) is compose of many events and occurred over an interval.


This is, of course, true, yet it is more convenient from computational point of view to deal with discrete time points than in intervals, furthermore, some systems have detection time semantics, looking at the time-stamp in which the event entered the system, rather than the time it occurred, this is the reason that we find time point semantics in most systems.


We can look at the following cases:

Bottom line:  the event processing systems of the next generation should support both time point and interval semantics along with uncertainties (Paul also had posting about "fuzzy patterns" on which I'll write in the future).
Posted by Opher Etzion at 10:18 AM No comments: