More on semantics and race conditions

In previous posting I have posed the following sceanario: 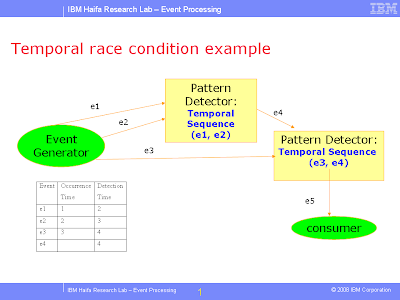 I also asked the question is -- given the above - will the action triggered by e5 occur?, i.e. will the pattern - "e3 before e4" be evaluated to true?

I got a few answers to this and you can read them as comments to the original posting; as promised I am dedicating this postings to analysis of this simple case:

Getting back to the example - in the small table on the bottom left-hand side of the figure above, there are occurrence and detection times of e1, e2, e3. For e4 there is only detection time - e4 is different from {e1, e2, e3} by the fact that it is a derived event and not raw event like the other three. The question is "what is the occurrence time of a derived event" ? -- there is no clear answer for it - there are several possible answers:

The phenomenon of multiple semantic interpretations apply to various other semantic decisions in the semantic of event processing language, and the preferred solution is to provide the user with semantic "fine tuning" policies, under which the user can chose the desired semantics, instead of "hard code" a certain semantics (using the most common one as a default), this is one of the benefits of using COTS for event processing, since it is quite difficult to think about such issues when developing EP manuaully using conventional language.

The semantics of the second "temporal sequence" (e3, e4) is thus:

Bottome line: the temporal sequence (e3, e4) is satisfied if:

In all other cases the temporal sequence will not be satisfied and the corollary action will not execute.

On HITC and some small stuff 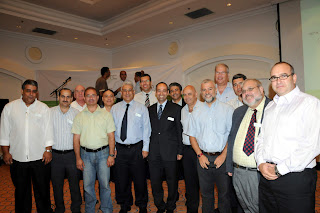 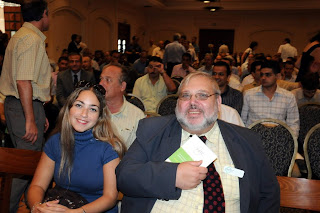 I have written about a month ago about the Arab Israeli High Tech Center, whose first goal will be to convert Arab Israeli engineers and mathematicians, to work in the very demanding Israeli high-tech industry. Earlier this week there was very impressive ceremony of kick-off for the center (that somehow migrated from AITC to HITC), in the two picture above - the top one is a group photo of the management and industry advisory committee of the center, and in the bottom one you can see me sitting in the crowd, with my eldest daughter, Anat, that decided to come and watch. This project is highly supported by the Israeli High-Tech industry and some of them included their country general managers -- like: HP, Oracle, BMC, EDS and Matrix (and Israeli services company), and other companies like - IBM, Motorola, Intel, Microsoft, Checkpoint and more, were represented by a senior person, there were several hundred people present, and was quite impressive -- studies will start in February 2009, and still a lot of work to be done to make it happen, but people came in feeling of a history in the making.

And back to event processing -- in the next posting I'll talk about the semantic question I have posted last week, and meanwhile just some short comments: