How can the level of uncertainty be determined?

You may identify this formula as Heisenberg uncertainty principle,  nature is full of uncertainty and so is the world of business and any other world.  It is not difficult to convince people that uncertainty representation and handling is needed, but people wonder how in practice people will be able to consume and digest uncertainty based systems.   I'll try to refer to it in a series of posts,  the first of them deals with the following issue:  uncertainty handling models assume that the level of uncertainty can be quantified.  Quantification can be in the discrete world, a collection of values, and in the continuous world -- probability, measure of belief, and similar metrics.    The question is -- how can we determine the value that represents uncertainty.

There are three ways to determine uncertainty:   prior knowledge,  observation and  statistical reasoning.

The prior knowledge often exists due to physical properties:  the accuracy of sensor may be a property of the sensor reported by the producer, mathematical models can determine the error rate of physical measurement due to friction or other physical phenomena, this can also be rooted in statistical analysis, but for a various system it is given as prior knowledge.

Observation:  In some cases and observation includes some uncertainty, such as:  I left home somewhere between 8 - 8:30am,  there was an accident somewhere in main street that made me late for the meeting, I heard that the accident was caused due to a drunk driver (but not sure this rumor is true),  I arrived to the meeting a few minutes after the meeting start, and waited a long time to the elevator that took me into the 35th floor.

This observation is full of inexact fact: time, space, event attributes and more.  People typically does not know how to quantify it, but can use fuzzy terms that can be translated into quantified values either in the discrete space or in the continuous space.

The statistical reasoning path is based on learning mechanism that is based on the ratio between historical input and the real value.  The assumption here is that eventually the real value is known and can be compared to the reported value.

There are some interesting questions about the representation formalism, the coverage that can be obtained by these methods, and the methodology for value assignment.    I'll write about these questions in a following post.
Posted by Opher Etzion at 5:51 PM No comments:

On what you need vs. what you can consume 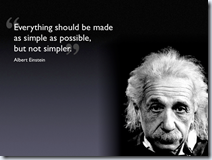 In a recent review on our uncertainty project,  the major question that came up was -- will user be able to consume uncertain data, or uncertain decision making?   The question of consumability is a major question -- and it seems that in some cases consumability is considered as a barrier of introducing new technologies.   This is true for all technologies based on statistical reasoning that have the reputation that in order to use them  one has to be PhD in statistical reasoning...   Consumability comes in all levels --- there are products that come with hundreds of configurable parameters to control its performance, some famous expert systems have been conceived to configure these parameters, as the quantity of humans who can successfully do it is too small,  Consumability comes to application developers that use languages and tools.  in many cases the amount of language commands that are not used is high, on the other hand, the developer is working hard to achieve the desired functionality, since it is not supported in a simple way.  Then of course consumability of any product to consumers.  Today we have very sophisticated washers and dryers with many programs, which totally not understood by the consumer,  or just look at a remote control for any home appliance -- TV, Air-condition and more -- do we really know what are all these buttons for?
Back to uncertainty --- it is quite clear that the world is uncertain, and ignoring uncertainty in decision making  may yield undesirable results.  It is also clear that in the daily life we often make decisions under uncertainty,  the main problem is how to move this intuition to a computerized form in a way that people will be able to utilize.   The major questions are:


I'll write more about it soon - in general, consumability issue in event processing application design and construction will occupy much of my agenda in the near future.  More - later.
Posted by Opher Etzion at 9:51 PM No comments: